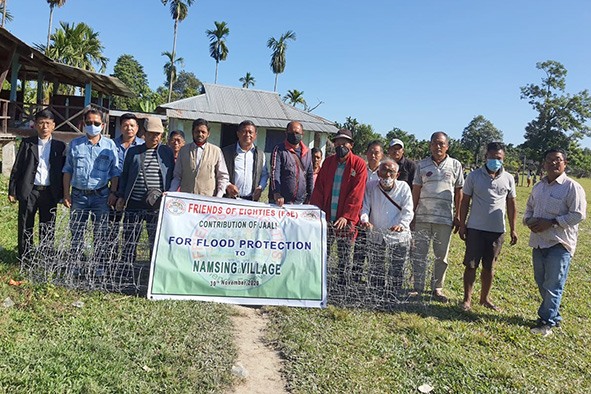 NAMSING, Nov 30: Four rolls of sausage wire mesh and a thousand sandbags were donated to the residents of Namsing village for the purpose of flood protection work by the Friends of Eighties (FoE), a group of friends based in Pasighat in East Siang district, here on Monday.

FoE president, retired IAF group captain Mohonto Panging Pao in a release stated that the left bank areas of Mebo subdivision in East Siang district, including Namsing village, have been ravaged by the rampaging Siang river over the last few years.

“Thousands of hectares of fertile land, plantations and forests have been eroded by the Siang river. School buildings, offices, playgrounds and portions of the vital Mebo-Dhola road have been washed away. The damages have been more after the recently built tie bund in Sigar was breached,” he added.

Members of the FoE, including its secretary Botem Koyu and others, GBs, village leaders and elders were present on the occasion.