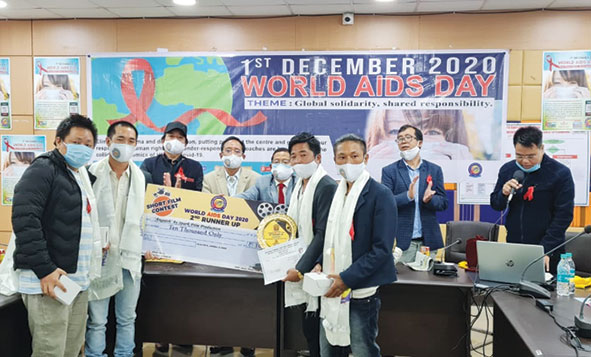 ITANAGAR, Dec 1: World AIDS Day was observed across the state on Tuesday with the theme ‘Global solidarity, shared responsibility’.

In the state capital, the Arunachal Pradesh State AIDS Control Society (APSACS) organized a programme to felicitate the winners of the short film competition on HIV/AIDS to mark the day.

Addressing the programme, Health Services Director Dr M Lego asked the people to extend solidarity in the fight against HIV/AIDS, and advised them to “share the responsibility of creating awareness about HIV and AIDS.”

“The epidemic of HIV and Covid-19 has emerged as a global pandemic and pose a threat to public health all over the world,” he said, adding that the youths “should act responsibly while facing pandemic like HIV and Covid-19.”

APSACS Project Director Dr Riken Rina explained the importance of World AIDS Day, and said that “the epidemic of HIV is in existence for the last 40 years but till today there is no cure for HIV.

“The only answer against HIV is your knowledge and awareness,” he said, and stressed on the importance of ‘ABC’ – ‘A’ for abstinence; ‘B’ for be faithful to your partner; and ‘C’ for condom use – to prevent and control HIV.

APSACS Deputy Director (IEC) Tashor Pali, quoting the UNAIDS, said that “the theme of this World AIDS Day aims at eliminating stigma and discrimination, putting people at the centre and grounding our responses in human rights, and gender responsive approaches are key to ending the colliding pandemic of HIV and Covid-19.

“These crises have also been a wakeup call and an opportunity to do things differently, better and together. In many respects, defeating AIDS as a public health threat depends on how the world responds to Covid-19,” he said.

The day was observed across the other districts of the states, involving youth NGOs and other stakeholders, the APSACS informed in a release.

Speaking on the occasion, JDHS (in-charge) Dr YR Darang said that “prevention and compassion are the most reliable ways to deal with this dreaded disease as there is no permanent cure for it.”

ANMs, GNMs and health assistants were also present at the programme.