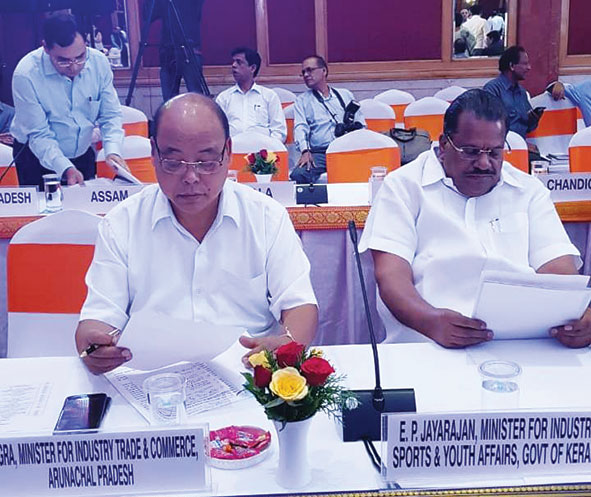 “Agriculture plays a vital role in the state’s economy, although the agriculture activities that have been taken up in the state are for self-consumption and only countable prospective entrepreneurs have taken up agriculture on a commercial level,” Bagra said during the second national level virtual consultative meeting of the Board of Trade (Earlier Council for Trade Development and Promotion), which was chaired by Union Minister for Commerce and Industries Piyush Goyal on Wednesday.

He said the state government under the initiative of the agriculture department has launched the ambitious State Organic Mission on 15 April, 2017, with a vision and action plan for transforming the state into complete organic state.

The minister informed that the state government under the initiative of the agriculture department has also worked out an action plan with a target to convert 100,000 hectares of area under agriculture and allied departments by 2022. The proposal has been submitted to the central government.

Bagra said the Pangsau Pass Land Customs Station in Nampong, notified way back in 1951, needs to be included in the Bilateral Trade Agreement between India and Myanmar.

The minister also urged the Centre to initiate and approve for establishment of a camp office of the directorate general of foreign trade in the state for dissemination of information on implementation of policy of the central government for smooth facilitation of trade, and also for pro-active measures like awareness campaign on export and import documentation.

He also raised the issue of constraints in logistics, gaps in export infrastructure, including testing and certification and streamlining of regulatory processes.

“The commercial commodities produced in the state are organic kiwi, apple, orange, honey, large cardamoms, pineapples, pears, medicinal herbs, tea and other organic agro-horti produces etc, along with its rich textiles, handloom and handicrafts products. Though these have high potential for export, these cannot be exported due to lack of export enabling facilities and infrastructures,” lamented Bagra.

Bagra advocated frequent trade delegations from northeastern region involving trade-bodies, like the Indian Chamber of Commerce, Confederation of Indian Industry and North East Federation on International Trade and others to ASEAN nations to help establish people-to-people contact and help in establishing new markets to harness the Act East Policy in a more meaningful way.

Stating that abrupt fluctuation of the rate of different commodities like large cardamom, ginger, tea, raw rubber discourage the farmers, the minister said a mechanism to control the rate of different commodities may be devised by the central government and special export package formulated for land-locked and underdeveloped states of the Himalayan region.

Other issues he raised during the meeting included early posting of customs officials  at LCS Nampong (Pangsau Pass), setting up of an export-oriented industrial park in Itanagar and other feasible locations in the state, establishment of a spice park in Namsai, establishment of a common facility center for storage & marketing of large cardamom and other agro-horti products at ALGs at Tezu and Pasighat and at proposed greenfield airport at Hollongi, along with establishment of extension & marketing facilities at Siliguri in West Bengal, establishment of an industrial corridor along the TAH  with state-of-the art cold chain, processing and marketing infrastructure on cluster-based industries and setting up inter-state integrated domestic trade centres in feasible inter-state boundary towns.

Terming road connectivity a determinant to trade, Bagra said that re-building of the Stilwell Road into TAH will connect the North East India with ASEAN countries and re-opening of the trade route through Pangsau Pass will greatly improve the trade relation between India and Myanmar and will also benefit the local population.