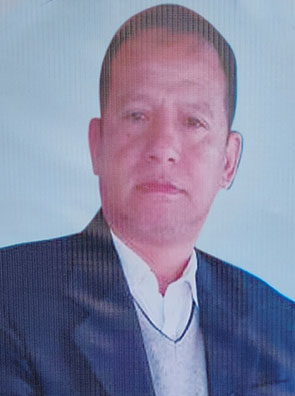 ITANAGAR, Dec 2: Dibang Valley DRCHO Dr Kengo Ori passed away on 30 November after suffering a massive stroke. He was rushed to Dibrugarh in Assam and breathed his last at 4.25 am on the day.

Dr Ori is survived by his wife Tumngam Loya Ori, a son and two daughters.

Born on 25 March, 1968 at Yigi Kaum of West Siang district, Dr Ori had completed his MBBS from the Jawaharlal Nehru Medical College in Ajmer, Rajasthan (1986-1993).

He was appointed as a medical officer and posted at the community health centre (CHC) of Ziro in 1993, becoming

He had also served as medical officer at the district hospital of Aalo, and CHCs of Dirang, Namtok, Liromoba and Nikte. He was appointed as West Siang DRCHO and went on to serve as the Dibang Valley DRCHO till his demise.

The members of the Arunachal Pradesh Doctors’ Association (APDA) have expressed their profound grief on the untimely and sad demise of one of its dedicated members, Dr Ori.

The APDA prayed to the almighty to grant enough strength to the family to bear the irreparable loss and for the departed soul to rest in peace.

In a condolence message, the CoSAAP said “the state government, its employees’ fraternity and the Galo society have lost a dedicated personality in the sudden demise of sincere and dedicated officer Ori. The vacuum created by his death will be hard to get filled in.”

The CoSAAP appealed to the state government, particularly the health department to  provide immediate relief services, including a government job on  compassionate ground to a member of late Ori’s  family.

It conveyed its deepest condolences to the bereaved family and prayed for eternal peace of the departed soul.

“In his sudden demise, the Galo community has lost a true stalwart, a social worker and a guiding light. The GWS offers its sincere prayers to Anv Dooxi Abo Poolo to bestow strength to his family, friends and relatives to bear this irreparable loss and prays for eternal peace of the departed soul in heavenly abode,” the society said in a message.