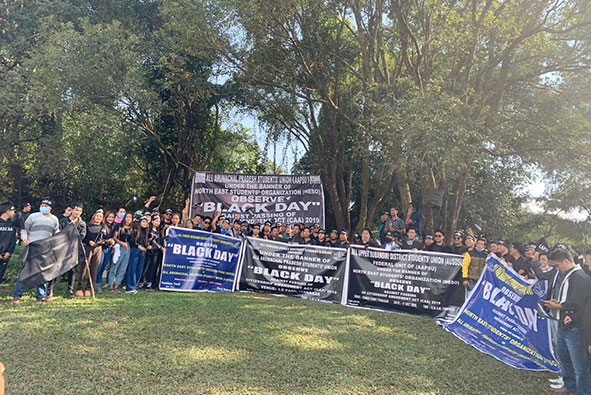 ITANAGAR, 11 Dec: The All Arunachal Pradesh Students’ Union (AAPSU) on Friday observed ‘black day’ at IG Park here under the banner of the North East Students’ Organization (NESO) to mark the passing of the highly-polarizing Citizenship Amendment Act (CAA), 2019.

The objective of the symbolic protest was to express resentment over the passing of the citizenship amendment bill (CAB) in Parliament by the BJP government. Members of various district students’ unions from across the state joined the protest.

Addressing the gathering, NESO coordinator Pritam Waii Sonam said, “This issue is stained by indigenous people’s blood. This issue is our fight for our own existence. The NESO will continue to launch stirs and oppose the act until it is repealed.”

Sonam also urged the government to make its stand clear on the vexed Chakma and Hajong refugees issue.

Terming the CAA “an act to accommodate foreigners in the Northeast region,” AAPSU president Hawa Bagang said, “We are trying to protect our own land. Arunachal cannot accept this foreigner act.”

Bagang said the entire Northeast region should stand with Assam, adding that peace and stability in the region depend entirely on Assam’s stability.

“This act undermines the rights of the indigenous people of the Northeast. The AAPSU will continue supporting the NESO to observe ‘black day’ every year,” Bagang said.

AAPSU general secretary Tobom Dai stated that the protest was “a grim reminder of the central government’s bulldozing the polarizing act against the people of the Northeast.”

He said the ‘black day’ was observed to “remind how elected representatives of the region failed the people.” He accused the Centre of playing “divide and rule policy game” with the Northeast states just to pass the CAA in Parliament by exempting certain tribal areas from the CAA.

The CAB was passed in Parliament on 11 December, 2019 and became an act. Many people have lost their lives during anti-CAA protests across the Northeast.

The All East Siang District Students’ Union also observed the ‘black day’ to protest the forcible implementation of the amended CAA.

The protesters said, “The new citizenship act would severely affect the age-old unity and peace among the indigenous people of Arunachal and also demolish the traditional practices of the ethnic tribes of the hill state.”

In Assam, the Dhemaji unit of the Asom Jatiyabadi Yuba Chatra Parishad organized a protest march in Dhemaji town and demanded that the government repeal the act.