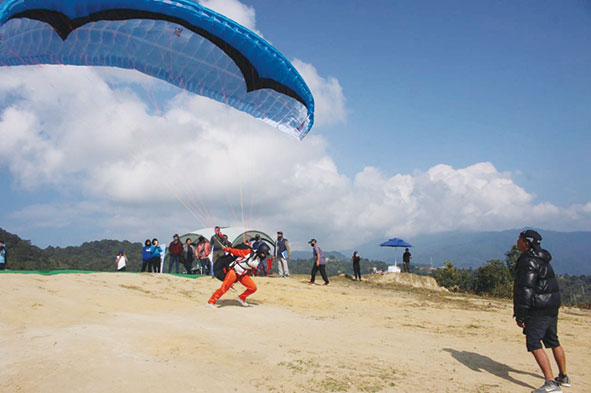 LUMDUNG, 16 Dec: The Paragliding Association of Arunachal Pradesh has surveyed and found Basar, Anini, Mechukha, Dambuk and Paya near Aalo to be most feasible locations for carrying out paragliding activities in the state.

This was informed by the association president, Vijay Sonam here in East Kameng district during the concluding day of the 25 days recce/survey for paragliding sites across the state.

Sonam further sought the support of the tourism department and the district administration of East Kameng to develop infrastructure in Lumdung for the upcoming international paragliding event, which will witness “the participation of a hundred paragliding pilots, out of which 25 will be international Para gliders.”

He also informed that a paragliding school in London wants to explore Arunachal once the Ministry of home affairs lifts the restriction on the visit of foreign tourists.

Secretary of the Arunachal Pradesh Tour operator Association, Bengia Mrinal assured to include Lumdung as one of the main tourist destinations in the Itanagar- Pakke Kessang-Seppa tourist circuit to boost community tourism.

Secretary Tourism Sadhana Deori appreciated the efforts of the Paragliding Association of Arunachal Pradesh and assured of the department’s support to the paragliding association in developing Arunachal as an adventure destination in India. She also said that new pilots would be encouraged to take up paragliding.

She further informed that the tourism department is also reaching out to the local communities to make Arunachal Pradesh “a paragliding paradise of the North East.”

Earlier, 16 pilots of the Paragliding Association of Arunachal Pradesh were provided paragliding sets and other adventures equipment by the tourism secretary under the CMPVY scheme held here.

The event concluded with pilots taking off and displaying their paragliding skills.

Around 38 pilots, including seven female pilots were trained by the Paragliding Association of Arunachal Pradesh, which has the highest numbers of female pilots in India.

Its member, Alisha Khojuju was the only female pilot to participate in the National Paragliding Championship held in November at Uttarakhand.

Among others, the event was also attended by Tourism Deputy Director Bengia Manna Sonam and paragliding trainers Kush Thakur from Himachal Pradesh and Raju Rai from Sikkim.