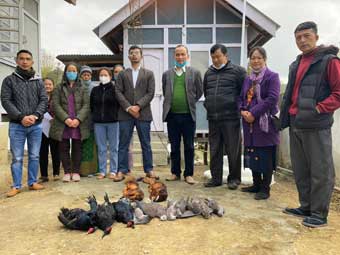 The red giant flying squirrel and khalij pheasants are listed in the Schedule-I of the Wildlife Protection Act.

Kumar informed that an unknown vehicle stopped by the market area and unloaded a bag near the road on 14 December. When the uniformed forest patrolling team on suspicion approached the vehicle, the driver dropped the bag on the road and fled away with the vehicle. The carcasses were found inside the bag, the DFO said.

Informing that an offence report has been registered under the relevant sections of Wildlife Protection Act (WPA), Kumar said investigation is on to identify the vehicle and person involved in the illegal activity.

The animal carcasses have been disposed off as per the provisions of the WPA, he said.

The DFO said that wildlife crime and hunting take its peak during the winter months in the forest areas due to visit of migratory birds, migration of animals to low altitude areas and increased demand of wildlife meat during the festive seasons.

“To curb this, the Hapoli forest division has intensified patrolling in forests, market areas and identified hotspots of wildlife trade,” he said.

The Lower Subansiri district administration had issued a notification on 15 August this year to bring air guns with bore diameter exceeding 0.177” under the licensing regime as per Arms Rules, 2016, the DFO informed.

Ziro valley has been attracting lot of migratory birds since time immemorial. The black-necked crane was recorded to visit the Ziro valley in the past. But due to habitat destruction and hunting, the wild birds’ population has rapidly decreased over the years, he said.

“Efforts are being made to restore the wild habitats of birds and animals to increase their population and species diversity in the region,” Kumar added. (DIPRO)