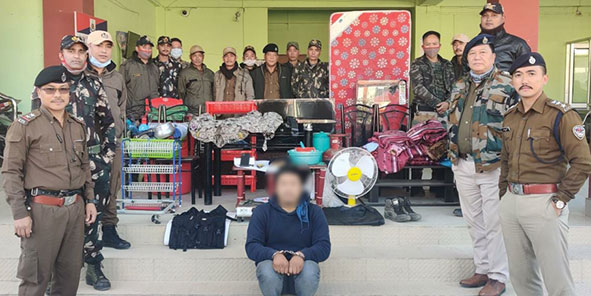 On 21 November, an FIR was received against Tsering and one T Pordung from a married couple here, who informed that the duo came to them with an interest to buy local beads.

“In the month of October, both came to the complainant’s house to see the local beads and agreed to purchase the beads worth around Rs 17 lakhs,” the police here said. The wife informed the police that after a few days, the duo contacted her on the phone and said that they wanted to come to her house to buy the local beads. However, she informed that she was busy attending to her sister at RK Mission Hospital and asked them to come some other time.

“On learning that she (complainant) was not at home, Tsering and Pordung trespassed into her residence and stole the local beads from her residence. After commission of the offence, both had switched off their mobile phones and ran away. Accordingly, a case was registered at the Itanagar police station (u/s 380/34 IPC) and was endorsed to SI Kenter Tacha,” the capital police informed.

One of the accused, Pordung, in her statement before the investigating officer stated that she was Tsering’s girlfriend for the past several months. Apart from Pordung, some other witnesses also claimed that the accused had introduced himself as a Monpa man from Tawang district. He had also told them that he was an IRBn constable working in the police department, and that he was currently attached as a PSO to one of the MLAs.

“She said that they were in constant touch with each other. But immediately after the commission of crime, the accused Tenzing Tsering disappeared from Itanagar with the local beads and switched off his existing mobile SIM number and never contacted her again,” the police said.

The police team then directed Pordung to check Facebook and dating sites to look for any new accounts of the accused Tsering as he had blocked all his old accounts.

His new number was put under surveillance and it was mostly found in VIP Road in Magzin area of Guwahati, Assam.

“His girlfriend and co-accused was further directed to talk to him and invite him to come to Itanagar to meet her. As per the trap we planned, the alleged accused finally came out from Guwahati, Assam on 10 December,” the police said.

However, on regular tracking, his location was found to be Likabali instead of Itanagar. The same was informed to the OC of the Likabali police station.

The team raided a location on 11 December and managed to apprehend Tsering with a Maruti Swift VXI (AR-01G-0875) car after chasing him for a few kilometres.

Later, Tsering was brought back to the Itanagar police station and interrogated thoroughly. He then disclosed that his real name is Kalu Chetry.

A permanent resident of Sonitpur district of Assam as per official documents, Chetry was born and raised in 8 Kilo in Tawang and is fluent in the Monpa language.

“Tenzing Tsering and Sonam Tsering were the nicknames he had kept for himself,” the police said.

On thorough examination, a police identify card of H/C Menkek Karna, 1st AAPBn, three ATMs, an Aadhaar card in the name of Sonam Tsering, a mobile handset, and the Maruti Swift car were seized from his possession.

“On further interrogation, the accused disclosed that he took the local ornaments, which included two strings of local beads (one worth Rs 10 lakhs and another Rs 7 lakhs), a single bead worth Rs 30,000 and three brown belts (ugpi) worth Rs 40,000 from the complainant’s house on 26 October to be sold further on commission basis and that the complainant had given the ornaments in good faith,” the police said.

He revealed that he sold the local ornaments on 27 October at much cheaper rates to various buyers and went on to buy a secondhand Maruti Swift car at Rs 3,20,000 from M/s SK Enterprise near Barapani, Naharlagun.

On the same evening, he fled with all the money from Itanagar to Guwahati, Assam, where he took a room on rent at VIP Road, Magzine, Guwahati.

Reportedly, the accused spent the money in purchasing luxurious household items for his rental room, which was later recovered by the police team after his arrest.

The SP informed that investigation is still going on to recover the rest of the local ornaments worth around Rs 7 lakhs and one ugpi worth Rs 40,000 from the receivers, who are out of town due to the ongoing panchayat election.