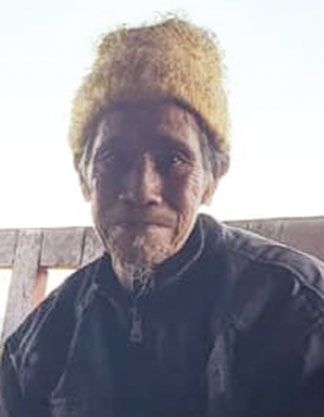 DAPORIJO, 28 Dec: Giji Lamdik, the first priest of the Achi Riabu Ponung team during the first Si-Donyi festival celebration here in Upper Subansiri district in 1975, died on Sunday due to cardiac arrest at his residence in Dulom village near here.

Achi Riabu was among the three official Ponung teams introduced during the Si-Donyi celebration here in 1975. The other two teams were Anyi Chune and Takar Gene.

Lamdik is survived by his wife, two sons and two daughters.

One of the founder members of the Si-Donyi festival celebration in Daporijo, Lamdik was serving as the GB of Dulom village at the time of his demise. He was also the priest of the Achi Riabu team for the Si-Donyi celebration in Tawang about 30 years ago. The team was led by former MLA Larbin Nasi.

Meanwhile, condolences have poured in from various quarters over the demise of Lamdik.

“Lamdik was not only a priest but also a good human being having good rapport with his people. He made great contribution in celebrating the first Si-Donyi festival at the community level in Daporijo in 1975,” TCS assistant secretary-general Taye Riamuk said in a press briefing.

The society offered heartfelt condolences to the bereaved family and prayed for eternal peace of the departed soul.

Central Si-Donyi Festival Celebration Committee (2020-22) chairman Dosh Dasi expressed profound grief over the sudden death of Lamdik and described his passing away as a great loss to the Tagin community.

“My thoughts and prayers are with the bereaved family members at this difficult moment,” he said, adding that Lamdik’s contribution to Si-Donyi festival and the Tagin community would always be remembered.

Dasi also attended the funeral of late Lamdik on Monday and paid his last respects to him.