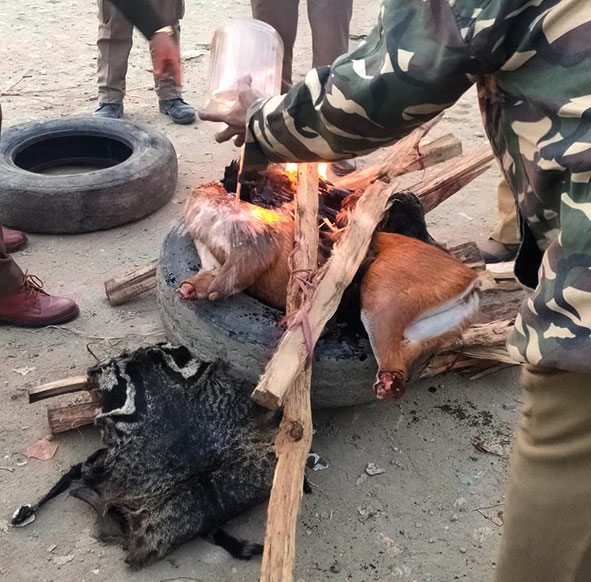 DAPORIJO, 29 Dec: A patrolling team of the Daporijo forest division in Upper Subansiri district conducted an operation against hunting and selling of wildlife meat in Daporijo town market, and seized a number of wild animals’ carcasses on Tuesday.

Daporijo Divisional Forest Officer (T) Boken Pao informed that, during the operation in the market at around 2 pm, the patrolling team seized wildlife carcasses, including that of a large Indian civet, a hog deer, two flying squirrels and two jungle fowls. The team, however, could not nab the wildlife trader, who fled from the spot.

The forest officials later burned the carcasses at the marketplace in the presence of the people.

“The forest officials sat in a meeting with Upper Subansiri DC Kento Danggen regarding unabated hunting and selling of wildlife meat by the local people,” said the DFO.

Sources said that a section of high-profile people of the district is indirectly encouraging wildlife poachers to carry out illegal practices for consumption of meat.

Meanwhile, the forest officials of the Daporijo division have taken steps to stop hunting and poaching of wildlife in the area. They also moved the DC to issue a circular in this regard, and to help the department in organizing mass mobilization on wildlife conservation.