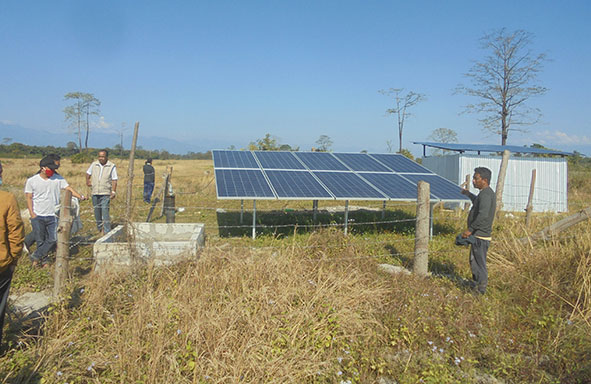 PASIGHAT, 30 Dec: RTI activist of Pasighat and president of Siang Rights Forum (SRF), Shoney Pertin, along with a large section of villagers at Mebo in East Siang district have alleged that Pasighat division, water resource department (WRD) is not properly implementing irrigation schemes in the sub-division.

Pertin and the villagers are raising allegations that the Pasighat division of the WRD has violated certain norms and guidelines in implementing bore-well irrigation scheme sanctioned under the North East Special Infrastructure Development Scheme (NESID)-2019-20.

As per the allegation, the farm-house constructed along with bore-well and solar plates of the irrigation schemes are sub-standard and not constructed as per estimate given in the DPR.

“Moreover, the water resource officials had no concern with local villagers/ farmers for implementing the construction schemes in their area,” they said.

It is observed that construction works of the three units of the irrigation scheme is going on even after eight months from closing the project in March this year.

Substantiating his allegation with official documents collected under RTI Act, 2005, Pertin and his members said, “The irrigation project was closed in March this year, but the contractor concerned is yet to complete the project.”

“The WRD officials released the entire payable amount/ bill to the contractor before executing the irrigation project,” they alleged.

Notably, RTI activist Pertin filed an appeal with the Arunachal Pradesh Information Commission, Itanagar complaining of non-furnishment of pictorial evidence (by the PIO) of the irrigation scheme implemented by the WRD.

The chief information commissioner, after hearing the appeal by an order (No.APIC-157/2020 dated 15th December), directed the appellant (Shoney Pertin) to have an inspection of the project site along with WRD officials and take required photographs of the project.

Pertin, accompanied by WRD assistant engineer (Mebo) and media person visited the irrigation project sites at Namsing village in Mebo on 27 December and found that construction of the project work was on at three locations.

Water Resource AE (Mebo) Geyon Tayeng said that his department has received an amount of Rs 40.30 lakh for implementing three units solar power operated irrigation project, which was a component of the much hyped Rs 35 crore ‘Anti-erosion project’ implemented at Mebo. The project was funded by DoNER ministry in August last year.

“We could not conduct construction activities of the solar irrigation project as there was no road to reach the project site during rainy season. Though the project was closed in March of this year, we are conducting the work now after the roads amid crop fields are cleared this winter”, said AE Tayeng, while talking to this correspondent.