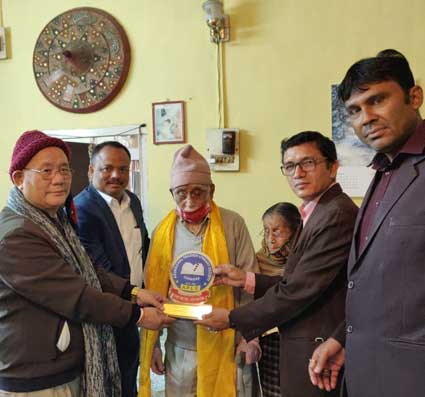 A delegation of the APLS, led by its president Yeshe Dorjee Thongchi, called on the former APCS officer at his Guwahati residence on Wednesday and presented the award that carries a citation, a plaque, a shawl, a collection of books, and Rs 10,000.

Recalling Borpatra Gohain’s contributions in spreading the light of education in Arunachal for several decades from the 1950s, Thongchi said his contributions, made at a time when the hilly state hardly had any roads and modes of transportation, had brought about meaningful changes in the lives of the people.

“The people of Arunachal Pradesh still remember Chandra Borpatra Gohain with love and reverence. Even the sun failed to illuminate the state with a rugged forested terrain in those days but Borpatra Gohain’s efforts radiated our lives with the light of education,” Thongchi said.

Gohain in his acceptance speech recollected his days in Arunachal from 1953 to 1980 and said that his soul was still in Arunachal, even though he has been separated from the state physically.

“I spent a good part of my life in Arunachal, closely interacting with the local people and was fascinated by their vibrant multi-cultural mosaic. Spreading education in the remote areas was extremely challenging in those days and quite dangerous, as well. The award is a recognition of my endeavour and I feel inspired,” he said.

Meanwhile, a book containing Lummer Dai’s literary creations, published by the Assam Prakashan Parishad, was released during the inaugural function of the 33rd Guwahati Book Fair at the Assam Engineering Institute playground here on Wednesday.