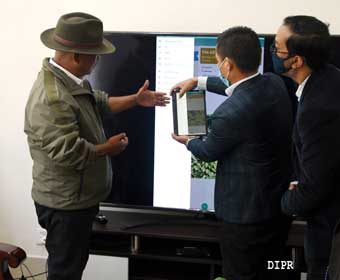 Congratulating the IPR for coming up with the digital version, Felix said, “The main idea behind this digital calendar is that it is eco-friendly, unlike its physical form which gets thrown away after the year ends.”

He commended the effort and stated that “this is the digital era and hence, changing with times is must.”

Suggesting a few changes, like mentioning details of the listed holidays, in the e-calendar, Felix said that “it should serve as a window to Arunachal’s biodiversity and be a tool in enhancing tourism.”

The e-calendar contains the list of all the local, national and restricted holidays and has an inbuilt diary in it.

The diary, like the annual diary that the department published in the past, contains the contact numbers of all the important offices of the state government, besides providing details of other important sectors.

The department this year did not print the annual calendar and diary, following the central and state government’s instructions.

The mobile app, ‘DIPR Arunachal’ is available on Google Playstore and will soon be available on Apple Store as well.

IPR Secretary Nitu Glow, the IPR director, and officers and officials of the department attended the event. (DIPRO)