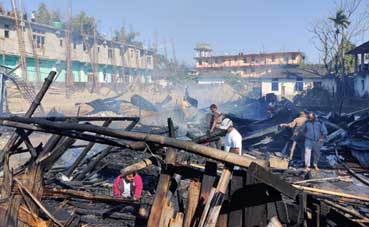 The fire that broke out in the land of Dr Onik Moyong has rendered the house dwellers —  Ram Bharosa Gupta, Munna Khan and Hari Gupta  – homeless.

Five LPG cylinders reportedly exploded in the fire. The cause of the fire is yet to be ascertained.

Fire tenders along with safety crew team of the Indian Air Force (IAF) from Pasighat ALG immediately rushed to the site to control the inferno. Three fire tenders from the Pasighat fire brigade were also pressed into service and doused the blaze within 40 minutes.

The district administration handed over some cash amount as immediate relief to the victim families.

Meanwhile, local MLA Kaling Moyong expressed grief over the fire mishap and asked the party workers to carry out relief measures for the fire victims.

Adi Baane Kebang (East Siang) secretary (administration) Samuel Doruk appreciated the efforts of the IAF team and appealed to the police and the fire brigade personnel to keep their fire equipment always ready for action.  (DIPRO)