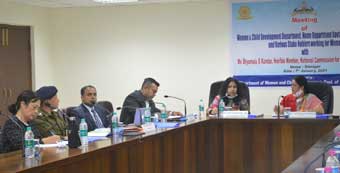 She said this during a ‘review-cum-coordination meeting’ which was organized by the WCD department at the secretariat here on Thursday.

Kundar stressed on the need for conducting more awareness programmes at the panchayat level regarding the one-stop centre (OSC), which she said would help women in need get help.

During the meeting, WCD Secretary Niharika Rai briefed about the working of various departments during the Covid-19 pandemic in the state.

DIGP (HQ) Madhur Verma and DIGP (Planning) Romil Baaniya presented the status of utilization of the Nirbhaya fund in the state. They also briefed about the steps being taken by the department to control crimes against women.

ICR SP Jimmy Chiram informed about the initiatives undertaken by the police to curb growing cyber crimes in the capital.

APSCW Chairperson Radhilu Chai Techi mentioned the recommendations that the state commission had made to the state government, while Oju Welfare Association chairperson Ratan Anya spoke about the working of the NGO on various women-centric programmes.