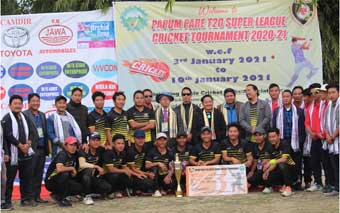 After being sent to bat first, Sagalee posted 128/7 in their allotted 20 overs.

While chasing the target, Balijan were bundled out for 60 runs in 15 overs.

Sagalee’s Techi Neri was adjudged man of the match for his rapid-fire 90-run knock from 64 balls, which was studded with 10 fours and three sixes. He also took crucial three wickets in the final match.

Later, Neri was declared player of the series for his all-round performance. He scored a total of 222 runs and claimed 13 wickets during the tournament.