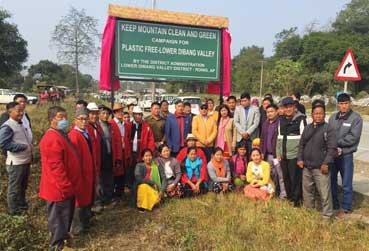 Deputy Commissioner KN Damo informed that three level task force committees at district, block and village levels have been constituted for strict regulation and monitoring of the campaign in the district.

EE PHED Roing highlighted on the negative impact of plastic waste and garbage.

The campaign was officially launched in the district on 11 January from the Shantipur check gate.

A team of the 12th NDRF with complete rescue equipment is seen patrolling the Lohit River on the occasion of the Parashuram Kund mela. The Mela, which started on 12 January, will end on 15 January.