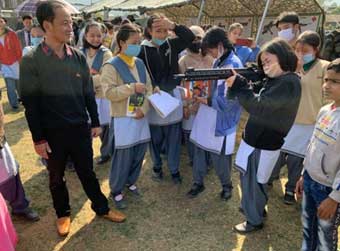 DAPORIJO, 15 Jan:  The Indian Army on Friday organized a mela themed ‘Know Your Army’ at the government higher secondary school here in Upper Subansiri district as part of the Army Day celebrations.

The aim of the event was to spread awareness among the civil population about the armed forces and motivate the youth to join the Indian armed forces, Kohima-based defence PRO Lt Col Sumit K Sharma informed in a release.

The event included display of wide array of state-of-the-art military weapons and equipment, which demonstrated the technological advancement and military might of the country. During the mela, the students were allowed to get hands-on experience of handling real weapons and it was the main attraction of the event, the release said.

This event saw an overwhelming participation of students and youth from the adjoining areas.