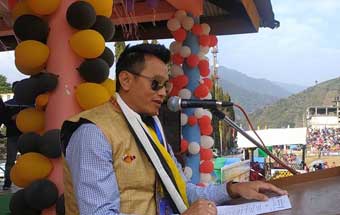 SEPPA, 15 Jan:  Former Indian football team captain, Bhaichung Bhutia has expressed his willingness to offer technical and professional guidance to the Arunachal Pradesh government to promote and develop football in the state.

“I personally and on behalf of the Sikkim United Football Club want to collaborate with the Sports Department, the Arunachal Pradesh Football Association or any individual to promote football in Arunachal. I am ready to support and guide to take football in Arunachal to a greater height,” the ace footballer from Sikkim said while addressing players and a huge crowd during the East Kameng Football Premier League’s final match at Seppa on Friday.

Bhutia said that the then secretary of sports, Sangay Lhaden, who died in a chopper crash in 2001 along with former minister Dera Natung, had scarified her life for the state, which made him (Bhutia) bond with Arunachal.

He encouraged the young players of the state to remain determined to achieve their set goals.

“All successful players in India are mostly from remote places. Players from remote areas or small villages have hunger for success,” Bhutia said.

“Definitely, players from different fields would come and represent India in the days to come,” the former India football team captain said.

He also shared how he became one of the best footballers of the country despite hailing from a small remote village in Sikkim.

Bhutia hoped Arunachal would produce national and international players under the leadership of MoS Youth Affairs (independent) Kiren Rijiju at the Centre and Sports and Youths Affairs Minister Mama Natung in the state.

Natung advised the players to remain dedicated and determined whatever discipline they are playing.

He informed that under the leadership of union minister Rijiju and CM Pema Khandu, the Khelo India State Centre of Excellence has been established at the Sangay Lhaden Sports Academy which will benefit the sportspersons of the state.

Responding to Bhutia’s offer, Natung said that the proposal would be considered after consultation with the chief minister.

Bameng MLA Goruk Pordung, in his address, advised the players to display their skills and maintain sportsman spirit.