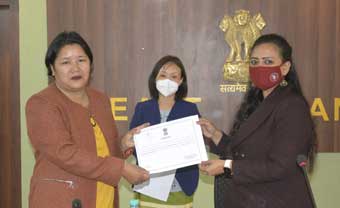 East Siang DC Dr Kinny Singh administered the oath of office to Borang, Megu and all other newly elected councilors at her conference hall here on Friday.

Congratulating all the newly elected councillors, ZPMs and gram sabha members, Dr Singh  urged them to work with team spirit and coordination on city sanitation, cleanliness and garbage management, innovative revenue generation and creation of sustainable income generating assets within the municipal area.

The DC sought support and cooperation from them for success of the month-long ‘Beautiful City Campaign’ to be launched by the district administration on 26 January.

The councilors also shared their priorities for improvement of their wards in terms of street-lighting, drainage system and various other civic amenities.

Borang called upon the ZPMs to contribute their best for grassroots development and creating self-sustainable assets.

Briefing them about their powers and responsibilities, she called upon them to work collectively to achieve common objectives of rural development. (DIPRO)