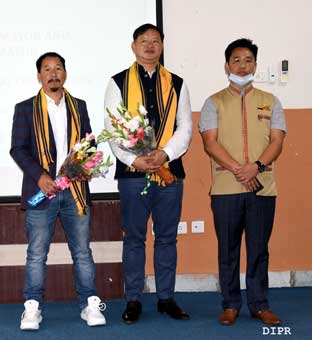 ITANAGAR, 15 Jan:  Bharatiya Janata Party (BJP) Corporator of Ward No. 17, Tame Phassang has been elected unopposed as the first mayor of the Itanagar Municipal Corporation (IMC) while the National Peoples’ Party’s (NPP) Ward No. 7 Corporator, Biri Basang will be deputy mayor.

The election process was held under the supervision of the department of Town planning & ULB here today at the Dorjee Khandu Convention Centre.

The Janata Dal-United (JDU) party that came second with nine seats did not file nominations for both the positions.

Speaking to the media, Phassang expressed his gratitude to his supporters and Chief Minister Pema Khandu for keeping faith in him.

“Law and order, sanitation, proper roads and basic amenities would be the top priority,” Phassang said.

“We won’t tolerate any kind of lackadaisical attitude in maintaining law and order as well as in any developmental works,” he asserted while adding that all the pending projects under smart city would be executed.

He further appealed to the people to extend all possible support.