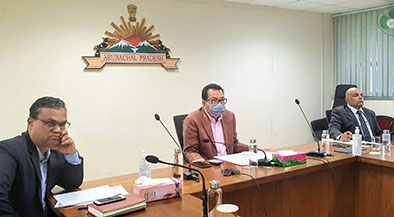 ITANAGAR, 18 Jan: Deputy Chief Minister Chowna Mein on Monday attended the virtual union pre-budget meeting of all the state/UT finance ministers, chaired by Union Finance Minister Nirmala Sitharaman, and requested the release of the state’s share of central taxes from the month of January 2021 in full.

He said that Arunachal, known for its extreme remoteness and backwardness, has witnessed an unprecedented development in the last five to six years, and stated the need to continue with the momentum to bridge the developmental gaps which remained unattended for decades after independence.

Mein said that the people of Arunachal have great expectations and hopes of achieving their dreams in development of infrastructure – roads, railways, waterways and airways, border areas, health, education and financial inclusion, and incentivizing suitably for being a carbon-sink state.

tap the borrowings by de-linking the same with the reforms such as EODB, ‘One nation, one ration’, etc.

He informed that the state has taken major steps in these reforms and achieved major milestones. He, however, pointed out that the lack of net connectivity and remoteness has hampered the progress to some extent.

He also sought for green bonus for the Indian Himalayan states, stating that the 15th Finance Commission in its interim report has given weightage of 10 percent to forest and ecology for determining the horizontal sharing of central taxes among the states.

He also emphasized on development of border areas as Arunachal has long international borders with three countries, viz, China, Bhutan and Myanmar, saying that some of the border areas are witnessing migration of population to foothills due to lack of connectivity and other basic facilities.

Mein said that “it is of critical importance that the areas near Indo-China border should be rapidly developed and the connectivity of roads improved, so that a permanent and patriotic border population acts as a check against any foreign misadventure.”

Informing that a comprehensive scheme for infrastructure along the Sino-India border areas is now active under the consideration of the central government, he sought support for the approval of the scheme.

Stating that Arunachal is perhaps the only state which has been deprived of externally-aided projects from organizations like the World Bank, ADB, JICA, etc, he requested the ministry for suitable alternative arrangements.

Mein also requested for release of fund under centrally-sponsored schemes as the implementation of some of the schemes on ground suffered a serious setback due to the Covid pandemic.

Stating that Arunachal has also lost crucial two months due to the conduct of local body elections coupled with the difficult year due to pandemic, he requested the government of India to consider releasing the next installment of the CSS without any conditionality.

He also expressed the need to extend social security schemes banking services to all the unbanked areas by opening new branches and customer service points (CSP) to cover all the beneficiaries, especially in rural areas for wholesome financial inclusion.

He also proposed to increase lending to the priority sector so as to benefit the unemployed youth and needy people and in order to provide smooth banking services throughout the state and further pressed to provide broadband connectivity in all the areas in the state by way of optical fibre and micro wave connectivity.

While expressing the likelihood of the battle against Covid-19 to continue for some more time, he said that the focus of the state government in the short run is effective Covid management, saving lives and providing sustainable livelihoods to its citizens on priority.