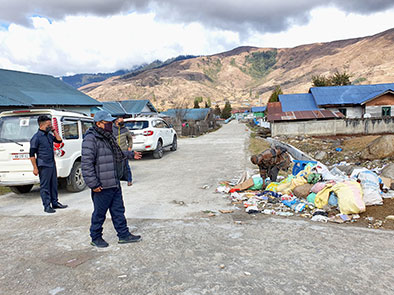 Sona, who is currently on an official visit to his home district, went on a surprise visit to various locations of Mechukha town on Thursday morning, and expressed serious concern over the reckless dumping of waste on the roadside and the drains.

Stating that “cleanliness of a place is a prerequisite for the growth of tourism,” Sona instructed the department concerned to initiate necessary steps to keep the town clean and green.

He suggested to them to remove all the unwanted signboards, electric poles and wires from the township area.

Meanwhile, the speaker appealed to the public to cooperate with the government departments and the general administration in making the township clean and green. (Speaker’s PR Cell)