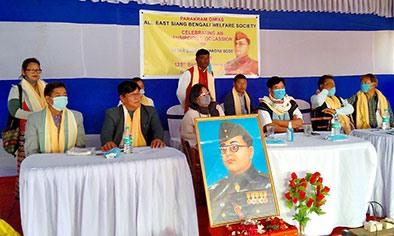 Speaking on the occasion, ADC (HQ) Tatdo Borang stated that Netaji’s patriotism and sacrifice would always inspire the people of the country. “The entire nation will remember his sacrifice and dedication for the independence of the country,” he said, and threw light on the formation of the Azad Hind Fauj and the bravery of Bose.

The ADC lauded the central government for declaring 23 January as Parakram Divas, and commended the East Siang Bengali Welfare Association (ESBWA) for organizing the programme.

She also appealed to parents to ensure education for every girl child.

Earlier, floral tributes were paid to the portrait of Bose by the dignitaries present at the programme. (DIPRO)