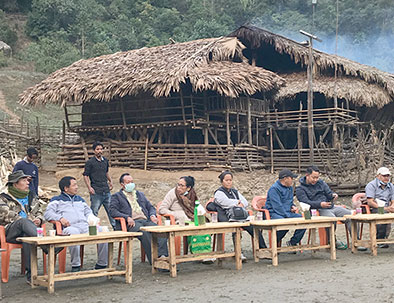 The MLA, accompanied by government employees, walked for five hours to reach the village, which lies between Leparada and Lower Siang districts.

The village has four houses, with a voting population of 36.

Addressing the people in the village, Rina said he was aware of the hardships being faced by the people because of lack of road network.

The village is totally cut off from all sides during monsoon.

Rina said he would seek a resurvey of the Rina-Hipo road, as a portion of the road that

was constructed has been washed away and is not viable for use anymore.

The MLA further said that, if the Hipo-Piiri road is constructed, Lower Siang and Leparada would be connected, adding that the state government is serious about inter- and intra-district connectivity.

He also announced funds for a hanging bridge and flood protection work at the village. He directed the departments concerned to finish the construction work by February.

Hipo Gaon Burah Iri Basar asked the MLA for early road connectivity to the village. He said that, once a road is laid, the village would be a major hub of agriculture and horticulture produces.