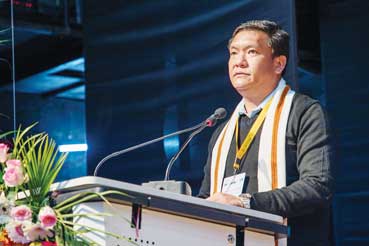 ITANAGAR, 28 Jan: Chief Minister Pema Khandu on Thursday gave assurance that, in accordance with Article 243 G of the 73rd Amendment Act, the panchayati raj institutions (PRI) of the state would be devolved power, authority and responsibilities in the days to come.

Speaking at the inaugural function of a three-day workshop on ‘Arunachal Pradesh panchayati raj – Vision 2026’ at the DK Convention Centre here, Khandu said the process of devolution of powers to the PRIs will begin from the forthcoming budget session of the state legislative assembly.

He admitted that, despite conscious efforts, the state government has failed so far in devolving powers and functions to the PRIs. He informed that an empowered committee under the leadership of the chief secretary will be constituted to “extensively study success stories of PRIs in other states and recommend the state government on devolution of powers and functions.”

“The recent decision to go for a two-tier PR system in place of the in-practice three-tier was taken in compliance with Part 9 of the constitution that allows states with population of less than 20 lakhs to have a two-tier system without the ‘intermediate level’, that is the anchal samiti,” he informed.

Arunachal has a population of about 14 lakhs, as per the 2011 census.

Addressing the newly elected zilla parishad chairpersons (ZPC), and zilla parishad members (ZPM), for whom the workshop is being organized, Khandu said the onus of making the state self-reliant now lies on the PRIs.

Reiterating the state’s potential in hydropower, tourism, agri-horti, mines and minerals, orchids, etc, he said, “You name it, we have it. With so much potential, it’s high time that we stopped depending solely on the Centre and stood on our own feet.”

“As grassroots leaders, your job is to think and work for your zilla and gram. If you are sincere, honest and determined, each gram will develop, each zilla will develop, our state will develop and our country will develop,” he said.

He called upon the local self-governance leaders to leave party politics behind and work together for their zillas and grams.

“Take politics as a profession, not as a reason for enmity, discord or dissent. The duty of the opposition is not to oppose everything but to proactively participate in developmental works. Now that elections are over, let’s work together as ‘Team Arunachal’,” he said.

Hailing the large presence of women PRI members, Khandu underscored the importance of their role in successful functioning of zilla parishads and gram panchayats.

“Women are more aware of their surroundings, needs of the society and ills of the society. Therefore, their active participation in decision-making at the gram and zilla levels is of utmost significance,” the CM said.

“Let us forget the past. We cannot undo the done, but it is our duty to ensure that polygamy is not practiced by our future generations,” he said.

Panchayati Raj Minister Bamang Felix informed that the workshop was planned and fixed days before the PRI election was even conducted. He said the state government is serious about empowering the PRIs “and therefore arranged this workshop to equip the members with the tools and knowledge to effectively discharge their duties at the ground in their respective jurisdictions.”

“Its just 13 days since you all took oaths. This shows our commitment to empower you all and make PRIs a very prominent and strong tool for the development of the state,” he said.