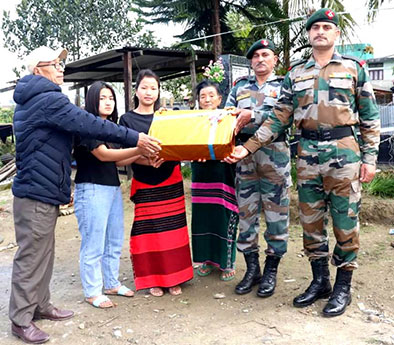 AALO, 29 Jan: The 44th battalion of the Jammu & Kashmir Light Infantry paid homage to late naik Tape Yajo, Kirti Chakra (posthumous) through a wreath-laying ceremony on the occasion of the 72nd Republic Day on 26 January.

All the family members of valiant soldiers who made the supreme sacrifice for the nation were felicitated by the battalion.

Late naik Yajo, hailing from Karo village in Monigong circle of Shi-Yomi, laid down his life during an operation against terrorists in Jammu & Kashmir on 21 September, 2008. During the operation, terrorists attacked unexpectedly from a very close range with heavy automatic gunfire, and in the ensuing gunfight at close range naik Yajo suffered a bullet injury. Despite being wounded and bleeding profusely, he charged at the terrorists at close range, and he and his team killed three hardcore terrorists.

His gallant action led to the elimination of the terrorists. Naik Yajo succumbed to his injuries on 22 September, 2008.

He was awarded the Kirti Chakra posthumously. (DIPRO)