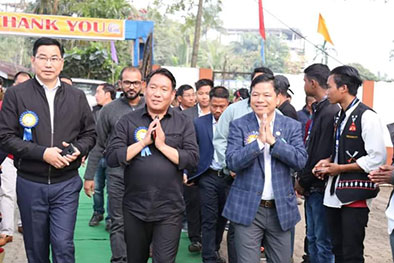 MLA Tsering Tashi, who kicked off the football league, spoke on the importance of playing sports.

“Games and sports are as important as formal education and the youth should focus on them as playing sports keep one physically fit and healthy,” he said.

Tashi appealed to the youths to stay away from drugs and alcohol.

Stating that the youth should also concentrate on protecting and preserving the indigenous culture, the MLA said, “We should not forget where our roots are and from where we have come.”

MLA Laisam Simai sought the government’s help to upgrade the stadium and to make it at par with the national standard. He appealed to the youths to avoid drugs and to utilize their youthful energy towards building a better society.

Sixteen teams are participating in the league.

The winner will be awarded a cash prize of Rs 1 lakh with a trophy, while the runner-up will be given Rs 50,000 along with a trophy.

The final will be played on 6 February.

The inaugural match between Jairampur and Miao was going on while filing this report.