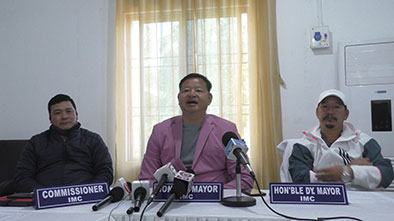 ITANAGAR, 3 Feb: The Itanagar Municipal Corporation (IMC) will give top priority to sanitation, cleanliness and the smart city project under its ‘Mission – 2022’, said IMC Mayor Tame Phassang on Wednesday.

Addressing media persons at the IMC office regarding ‘Mission – 2022’ and the pre-budget proposals, Phassang said “the IMC will put all its effort to prioritize cleanliness, sanitation and the smart city project in the next six months as a part of its ‘Mission – 2022’ to mark the platinum jubilee celebration of India’s independence.”

“Though the mission is tough, if denizens take the pledge and responsibility, we will definitely achieve the target,” said Phassang, adding that “taking responsibility and generating civic sense” are the need of the hour.

Stating that the IMC – a sovereign body – cannot always depend on government funds, Phassang appealed to the denizens to pay garbage collection charges and extend support to the IMC.

“Moreover, the IMC will soon publish the names and contact details of respective engineers and vehicles assigned to each sector, so that people would directly get information and share suggestions,” he said.

Elaborating the IMC’s proposals submitted to the state government, the mayor informed that the IMC has suggested to the sate government to develop and upgrade some bypass roads to lessen the traffic problem.

“Upgrading of the Ganga-Papu Nallah road via Jullang bypass road into two-lane, new bypass road from Chimpu to Nirjuli and Chandranagar to Pachali are some of the proposals which the state government has gracefully accepted,” informed Phassang.

Emphasizing the need for recreation centres and expansion of sector roads, the mayor said that the IMC has requested the state government to renovate the many-decades-old SPT quarters or replace them with G+3/4 buildings which can be used for public utility services in the future.

“Sector-wise, we can temporarily shift the families residing in government quarters to already established government buildings in Lekhi and Gohpur until the completion of G+ buildings,” suggested the mayor.

Stressing on town beautification, the mayor said that “roadside slaughterhouses will be regulated, stray animals will be taken care of as per rule, public toilets will be renovated, and plantation drives in collaboration with the forest department will be executed under the municipal area.”

Phassang further said that focus will also be on installation of streetlights in all the sectors under the IMC.