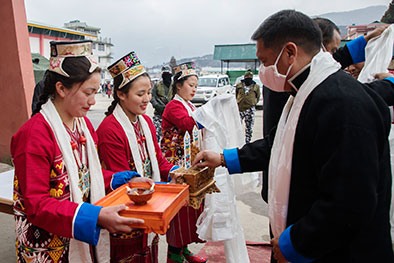 The MIPA is a pilot project which was launched by the department of karmik & adhyatmik Affairs (DoKAA) in 2018.

The first batch of 20 youths was given training by the Tibetan Institute of Performing Arts for 13 months, which included playing traditional musical instruments, etc.

Every year, a new batch is selected, based on screening as per their field of proficiency and interest.

Khandu commended the hard work put in by the students under the guidance of DoKAA Chairman Jambey Wangdi, and said participation of MIPA in almost all functions related to the Monpa culture has become the hallmark of such functions.

“You have become true torchbearers of Monpa art and culture. Your rich cultural heritage will survive and prosper,” he said.

Khandu stressed on the importance of preservation and promotion of Nalanda tradition that is being practiced in the Himalayan belt.

The chief minister called upon the locals to speak in theit own dialects,, so that the practice is passed down through generations. He said age-old traditional practices like farming are based on scientific temperament of the ancestors, which are time tested.

“We need to practice and promote our traditional way of farming, which is organic as well as environment friendly,” he pointed.

Informing that the state government will be laying the foundation stone of Maj Bob Khathing Memorial at Tawang on 14 February, Khandu sought cooperation and participation of all.

Meanwhile, Khandu conveyed his wishes for Lossar festival that begins next week.