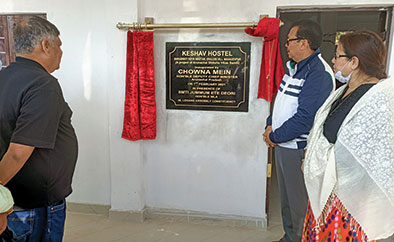 NAMSAI, 8 Feb: Stating that there has been improvement in the education sector of the state, Deputy Chief Minister Chowna Mein on Sunday said that the Pema Khandu government has brought in transparent reform in the recruitment process.

Speaking after inaugurating a boys’ hostel of the Saraswati Vidhya Niketan in Eraloni village in Mahadevpur on Sunday, Mein said, “There is no scope for corruption or malpractices in job recruitment.”

Established in the 1999, the Saraswati Vidhya Niketan is a project of the Arunachal Shiksha Vikas Samiti (ASVS).

Mein lauded the role of the ASVS in providing quality education to the people of Arunachal in the rural areas. He also lauded the ASVS for its efforts to protect and preserve the indigenous faith and culture.

The DCM expressed gratitude to the teachers from outside the state who made immense contribution in the field of education in the state.

Local MLA Jummum Ete Deori, who was also present, sought fund from the DCM for construction of a boundary wall around the school’s premises.

ASVS joint secretary Ashokan informed that the ASVS is running 26 schools in the state. “The society, established in 1994, is working in the field of human resource development in order to provide education in rural areas,” he said, adding that the ASVS also promotes local culture and the indigenous faith of the people of the state.

School management committee president S Bhide presented a brief on the school. Among others, the Mahadevpur ZPM, the Mahadevpur EAC, parents, teachers and students were present on the occasion. (DCM’s PR Cell)