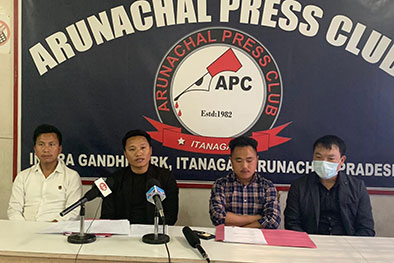 ITANAGAR, 11 Feb: The All East Kameng District Students’ Union (AEKDSU) on Wednesday termed the three-point resolution adopted by the district’s legislators over the Seppa-Chayang Tajo road “lacking political will and commitment” and instead called it “an eyewash and delaying tactic.”

taking to task those found guilty. It also said that the ongoing construction activities should be continued with the balance fund of Rs 19.5 crore without any interference and hindrances.

“The Team East Kameng has failed to demonstrate any tangible solution to the impending issue,” the AEKDSU said, and demanded that a tripartite agreement be signed between the AEKDSU, the East Kameng Social Welfare and Cultural Organization (EKSWCO) and the contractor to ensure time-bound completion of the project.

“The resolution should be conveyed to the authorities, including the chief minister, the chief secretary and the SIC SP, with a strong-worded letter to investigate the mismanagement of the road in a time-bound manner,” said Yangda.

“We express disagreement over the resolution as it was lack of political will and commitment. It was just an eyewash,” the AEKDSU president claimed.

Yangda urged the Team East Kameng (the legislators) to immediately remove the officers concerned from the division to ensure free and fair investigation.

“How can a fair and free investigation be possible when the technical committee involves the officer against whom investigation is being conducted?” he asked, and demanded that the authority send a new officer till the investigation into the mismanagement is completed.

“A new officer should be posted for free and fair investigation,” he added.

The AEKDSU president further claimed that, out of the total 81 kms, only 18 kms of actual work has been seen on the ground, and out of the total amount of Rs 172 crore, only Rs 19.5 crore remains.

Demanding a thorough investigation and booking the erring officers responsible for the massive mismanagement of the NEC road fund, Yangda questioned, “If work is getting delayed, how come the fund is exhausted?”

The district students’ union had conveyed its letter of disagreement to the EKSWCO chairman and the Team East Kameng leader and Sports Minister Mama Natung on Tuesday.

It further urged the Nyishi Elite Society and the All Nyishi Students’ Union to intervene to expedite the investigation on the scam-hit NEC road.

The AEKDSU contested that no additional funds should be sanctioned against the project till the exhaustion of the remaining Rs 19.5 crore on said road, and that the SIC report should be submitted within one month from submission of their letter to the authority.

Meanwhile, the EKSWCO in a press statement opined that the tripartite agreement would not yield any fruitful result since the matter is sub judice and within the purview of the SIC.

The union further stated that the EKSWCO and the AEKDSU should stand by the resolution of the legislators for proper investigation of the case by the SIC and seek time-bound completion of the investigation as per the rule of law.

“The EKSWCO has clearly informed the public that our motive is not to persecute any person or entity, but we will continue to advocate for successful completion of the project as per DPR,” it stated.

“The EKSWCO is also apprehensive whether the remaining fund of Rs 19.50 crore will be sufficient to complete the project,” it said, adding: “If the project is not completed, there are chances of wide-scale hue and cry in the district.”

While commending the decision of the legislators, the EKSWCO said that they should have “endorsed the copy of their decision to the competent authorities.”