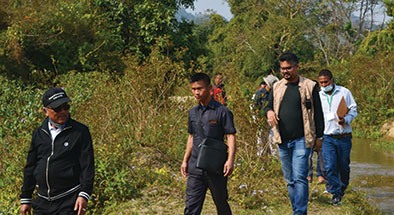 SONAJULI, 14 Feb: Agriculture, Horticulture and Fisheries Minister Tage Taki said that the government seed farm here in Papum Pare district sustained heavy financial losses due to the overgrowth of the rubber seedlings that were raised in the farm for distribution to other districts as no fund was released during 2018-19 to procure them.

Taki, who inspected the seed farm on Sunday, suggested measures to ensure sustainable crop production in the farm to enhance farm revenue.

The minister discussed with the Panchayat members for an amicable solution to the threat of land encroachment and taming the rivulet that is flowing through the farm so that the irrigation problem can be solved. He said that the land possession certificate issued by the district administration for which land value has been paid by the agriculture department should be acceptable to all.

Prior to his visit, the minister was briefed about the various issues like, damaged irrigation channel, land erosion, dilapidated infrastructures and fencing etc. by farm in-charge Techi Taura.

During the visit, the minister was accompanied by the state agriculture consultant and the director of agri-marketing.