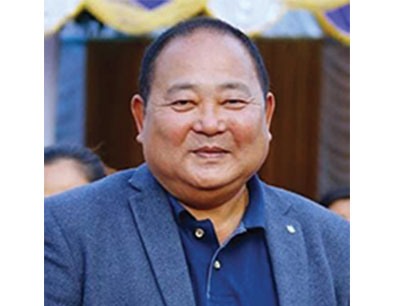 NAMPONG, 14 Feb: Abboo Kimsing, who was a legendary figure in the Tangsa community, breathed his last at his residence on 13 February after a massive heart attack.

Kimsing, 58, is survived by his wife, two sons and daughter.

Born in a farmers’ family in Nampong in Changlang district in 1962, he had to face a lot of hardship during his childhood period, but his sheer dedication and commitment earned him comforts of life.

Kimsing was instrumental in making the Pangsau Pass International Festival in Nampong. He was a very farsighted person and had worked for the development of health, education, health sectors and surface communication in the district.

He was regarded as an icon and held a high esteemed position in the entire Tangsa community.

Kimsing, who did his schooling in Nampong and college education in Shillong and at Itanagar, was very popular among all ages.

He was also a good sportsperson. He was a state level badminton champion and the best goalkeeper of the then Hell-Gate football team during his college days.

Kimsing always stood at the fore-front, whenever there was any disaster, natural calamity or anyone’s personal problem.