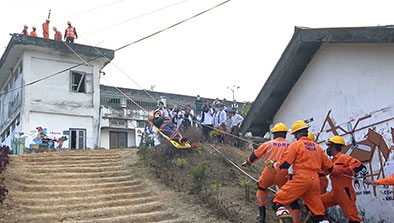 The exercise began on 14 February with a tabletop exercise and a meeting with all the members of the district disaster management authority, the incident response team and other related departments.

During the exercise, the NDRF demonstrated rescue techniques of the Force and what the public or students should do during such a scenario.

NDRF officials also briefed the students about the dos and don’ts during crisis situation.

Speaking on the occasion, Deputy Commissioner Bani Lego said “As Arunachal is prone to earthquakes and other natural disasters we need to be prepared for any eventualities in order to mitigate the damage caused by the disaster.”

Officer-in-charge Inspector Naval Singh told that “such exercises help in understanding the preparedness, the critical gaps, coordination between sister agencies and the response time in case of a disaster.”

The programme was attended by Longding MLA Tanpho Wangnaw, the DDMO and other officials. (DIPRO)