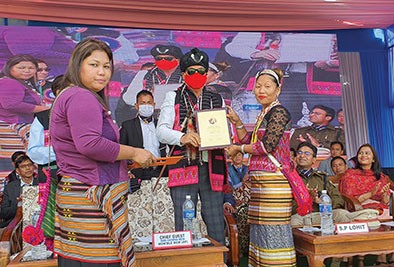 He informed this while attending the Tamla Du festival of the Mishmi tribe here in Lohit district on Monday.

“Parshuram Kund, which is one of the most sacred places, is visited by a large number of pilgrims throughout the year and its facelift will boost the sources of livelihood of the locals and lead to the socio-economic development of the area,” he added.

Advocating for preserving the age-old traditional system, practices and rituals, Mein called upon the youth to remain conscious of their rich culture and ethos to carry it forward.

“Against the backdrop of the attenuating influence of our tribal culture, it is important that our age-old traditional heritage is protected and preserved,” he emphasised.

He informed that state government will facilitate the preservation of cultural identity and to keep alive the age-old culture and traditions of tribal communities.

Advocating for ‘vocal for local’, Mein called upon the district administration to promote the Parshuram mela to showcase the rich legacy of indigenous products and other produce of the various tribal communities to boost the economic activities of the area.

While congratulating the newly elected PRI members of his constituency, Mein sought their cooperation and contribution to the development of the district.

He announced that he will leave no stone unturned in the development of the area.

Lauding the idea mooted by the Lohit Deputy Commissioner Marge Sora to create and develop green belts in the district, Mein declared to convert the area near the Kongmu Kham (Golden Pagoda) in Namsai district into a green belt.

Mein urged the deputy commissioner of Lohit to put a blanket ban on fishing and hunting in the district for a period of one year so that the resources could be replenished.

He also appealed to the gathering to shoulder the responsibility of protecting and preserving natural vegetation, wildlife, rivers and aquatic life.

The DC and ZPC Lohit Dasula  Krisikro also spoke on the festive occasion.

Colourful cultural presentations and a martial art demonstration by Lohit Karate Association were other highlights of the event. (DCM’s PR Cell)