Arunachal Pradesh, the 24th state of India, covers the largest geographical space among the eight sisters of Northeast having geo-strategic importance in the 21st century. It shares international borders with Myanmar (520 km), China (1,080 km) and Bhutan (217 km). Here, the term geo-strategic is not narrowly defined in terms of  a  counterweight , but it is  largely understood in a broader perspective  by  locating three  geo-economic  corridors  to  strengthen our cross-border relations  as well as  promote  India’s national interest   vis-a-vis Myanmar, Bhutan, and China as well . 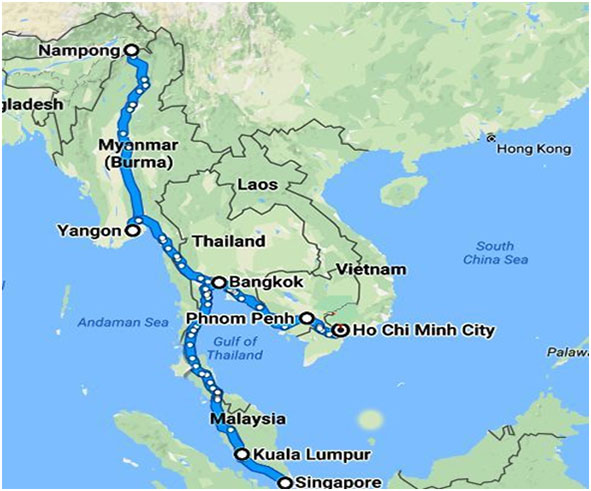 Nampong, which is situated in Changlang district of Arunachal Pradesh, could be a potential geo-economic corridor to uphold India’s economic interest with the Association of South East Asian Nations (ASEAN).

India has renovated its portion through two-lane highways, while China has renovated its own segment through six-lane highways. If the Myanmar segment is completed, then Nampong  can be connected to Muse, Lashio, Mandalay and Yangon (Myanmar) through Asian Highway (AH) 14, Ruili, Wanding and Kunming (China) through AH 3, and Bangkok (Thailand), Kuala Lumpur (Malaysia) and Singapore (Singapore) through AH 2, and further to Phnom Penh (Cambodia) and Ho Chi Minh City (Vietnam) of the greater Mekong sub-region through AH1.

It is pertinent to mention here that the road distance calculated  between Nampong-Mandalay-Yangon (1428.2 km), Nampong-Bangkok (2091.1 km), Nampong-Kuala Lumpur (3436.7 km), Nampong-Singapore (3795.2 km), Nampong- Phnom Penh (2737.1 km) and Nampong-Hanoi-Hochi Minh (3066.6 km) is quite a feasible proposition in terms of cost benefit analysis, as compared to the trans-shipment of goods to Southeast/East Asia from the Northeast via the Kolkata port, passing through the Siliguricorridor. The development of Nampong LCS would promote sub-regional /regional cooperation, and it would generate opportunities for Arunachal Pradesh to collaborate with the Association of South East Asian nations (ASEAN), Mekong-Ganga Cooperation (MGC) and Bangladesh-China-India-Myanmar (BCIM) Forum on multiple fronts. 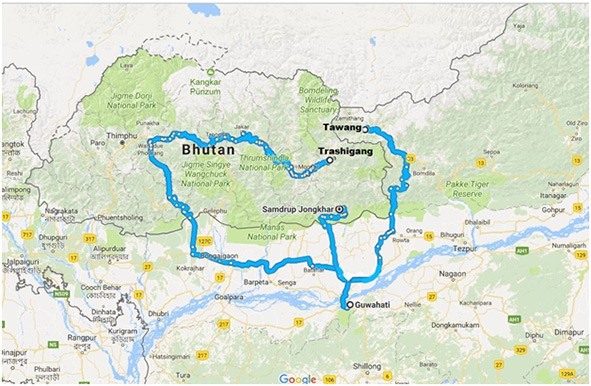 Tawang, which is situated in the western part of Arunachal Pradesh, could be a potential geo-economic corridor to Bhutan to reinforce India’s economic interest in the neighbourhood.  Given the strategic importance of the place, Tawang-Lumla (Western Arunachal Pradesh) -Trashigang (Eastern Bhutan) roadways should be developed to boost economic growth and development in the region. It would not only give quick access to Guwahati, Assam but it would also give passage for cross-border cooperation in the region.

As we know that Arunachal Pradesh and Bhutan have many commonalities in the field of  ecology and natural resources and they  could be mutual partners in the field of  hydro power generation, tourism, food processing and  beverage industries.

Beyond this, development of cross-border trade and cooperation in Indo-Bhutan sector would pave the way for sub-regional cooperation based on shared ideas materializing through multitude of partnerships. Further, such kind of cooperation would subsequently strengthen the South Asian Growth Quadrangle (SAGQ) and Bangladesh, Bhutan, India, Nepal (BBIN) Motor Vehicle Agreement (MVA) as well. 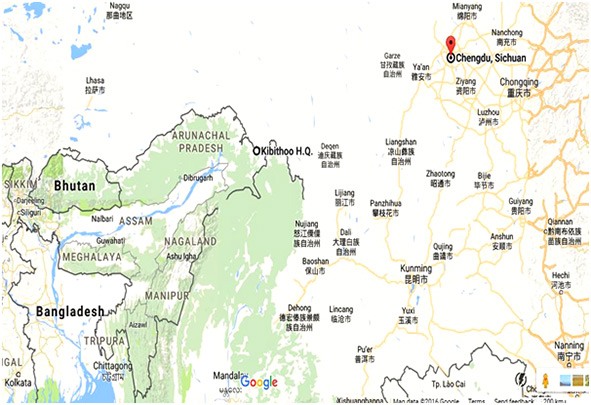 Kibithoo which is situated in Anjaw district of Arunachal Pradesh at an altitude of 4,070 feet above sea level enjoys geo-economic advantages to be developed as an all-weather road to the Tibet Autonomous Region, Sichuan and Yunnan of China. It would provide shorter and faster access to the Indian industries to tap the southwestern and southeastern Chinese markets.

The proposed geo-economic passage would counter Chinese penetration into the region while reinforcing India’s strategic significance along the McMahon line.

Moreover, the development of Kibithoo as an entrepot would give a chance to both India and China to switch their priorities from security to trade or economic collaborations based on sustainable engagement paradigms.

But the question arises on how Arunachal Pradesh can be placed in the larger canvas of free trade architecture to take hold of the opportunities in India-China sector given the nature of Chinese intransigence over the McMahon line.

To make it very clear, any cross border initiative is to be based on mutual compatibilities, but not on the contradictions or hegemony to shape any sub regional/regional architecture. The unilateral Chinese position would only foment trouble between the two Asian giants and would inhibit the pace and tranquillity of the region.

India and China being emerging global powers can shape the destiny of the 21st Asian century though mutual harmony and shared partnership. Hence, proactive dialogues along with strategic preparedness are to be sustained for cross border engagement between India and China. What is required at this stage is a joint Indo-China effort to transform this geo-strategic zone into a geo-economic zone for win-win situation.

Well, Arunachal Pradesh can be a potential geo-economic corridor to the East. In this connection, it would be noteworthy to point out that special economic zones, as well as industrial corridors, should be developed in Arunachal Pradesh, and the potentialities of the state in 5H (hydro, herbal, horticulture, handicraft and handloom) and the 3T (tradition ,tourism and technology) should be explored by tapping cross-border synergies.

Conversely, the threat perceptions, such as sneaking of drugs and small arms, illegal smuggling and dumping of Chinese goods, if any, should be identified and the challenges  be addressed by creating adequate space for  geo-economic  aspects  to take off.

Moreover, prior to that, it is highly necessary that Arunachal Pradesh should come up with specific manufacturing products and earn a ‘Make in Arunachal’ image to expand its global reach. Thus, the need of the hour is to frame action-oriented policies along with a fresh vision document, ‘ArunachalVision 2040’, and then transform them into practice at the ground level for the benefit of all.