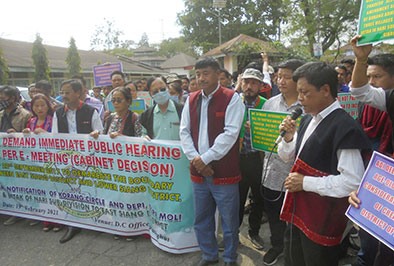 PASIGHAT, 19 Feb: Resenting the undue delay in conducting public hearing for demarcation of East Siang and Lower Siang district boundary, several members of the Adi Bane Kebang (ABK) and its other allies on Friday staged a dharna at the East Siang DC’s office here.

It may be recalled that the state government on 22 September, 2017 issued an order to the deputy commissioners of East and Lower Siang districts to conduct a public hearing over the issue, but the same is yet to be processed, causing great deal of dissatisfaction among people.

Based on the Adi community’s demand, the government excluded three Adi villages- Depi, Depi-Moli and Detak villages of Nari circle from the new district. The government, however, ordered maintenance of ‘status quo’ for the Adi villages falling under Korang circle and assigned the East Siang district administration to look after the administrative activities.

“The villagers residing in Ramle Banggo (Nari and Korang circles) irrespective of any community are willing to stay in East Siang for their convenience, which the authority should consider with attention,” the protestors said.

“Simen River is the traditional western boundary of the Adi and Galo tribes’ territories under customary laws. It is known to all that land or boundary disputes in the state are settled by customary laws, and the state government should not ignore it,” said leaders of the protesting organizations.