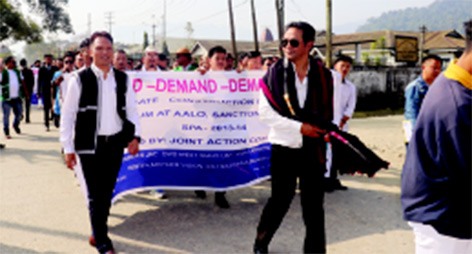 AALO, 22 Feb: The Joint Action Committee (JAC) – a conglomeration of NGOs of West Siang district, headed by the Galo People’s Federation (GPF) – on Monday organized a public rally to protest the inordinate delay in the construction of the outdoor stadium here in West Siang district.

Later, addressing the public, GPF general secretary Reken Ingo claimed that the project has been “de-linked from the union government, due to which the project is facing fund problem.”

Alleging that the state government was meting out step-motherly treatment to the district in the matter related to the construction of the outdoor stadium, Ingo demanded that the government provide sufficient fund for its early completion.

JAC chairman Doya Boje threatened to launch a “rigorous democratic movement if the government fails to address the issue on priority.”

He appealed to the legislators of the district to raise the issue in the upcoming budget session.

Later, the JAC submitted a memorandum to the chief minister through the West Siang deputy commissioner, demanding allocation of Rs 35 crores for early completion of the stadium, along with a ‘letter of assurance’ in the upcoming budget session.

The stadium had been sanctioned under the special plan allocation (SPA) during the 2013-14 fiscal and the construction had started on 6 March, 2017, with a target of completing it within 24 months, the JAC said.

According to the JAC, only 10-15 percent of the work has been achieved till date by the construction agency, TK Engineering & Consortium.

The memorandum stated that the project has been de-linked from the central government as the SPA has been relinquished by the present union government. “As per the records from the NITI Aayog,” the JAC claimed, “only Rs 9 crores have been released so far.”

The memorandum further stated that similar projects in Yupia, Ziro, Pasighat and Daporijo, which had been sanctioned in same the year, have been completed. Only the projects in Aalo, Tezu and Chimpu are languishing, it added.