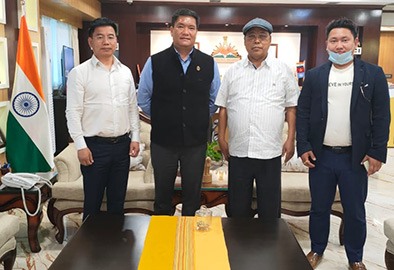 Bagra and Maj briefed the CM on the three major requirements of water supply, power supply and road connectivity to the project site.

The minister and the lead promoter informed that formation cutting and land development have almost been completed, and road network

in the park campus has been laid. They said that letters of intent have been received from 12 food processing-based companies so far.

Bagra also stated that, once the food park is established, it would provide a platform for thousands of farmers who would be able to upgrade their economic sustainability, and would also help in creating employment opportunities.

Maj informed that the food park is coming up in an area of 75 acres and a large chunk of the plot has been earmarked for the industry unit.

He also said that recently an inter-ministerial approval committee meeting of the food processing ministry was held, during which Food Processing Minister Rameshwar Teli approved the establishment of a “mini mega food park for the eastern part of Arunachal in Namsai.”

The chief minister said that the upcoming food park would be a source of employment generation and directly or indirectly employ thousands of people. The state government will also give priority to food-based industry and skill development, the CM said.