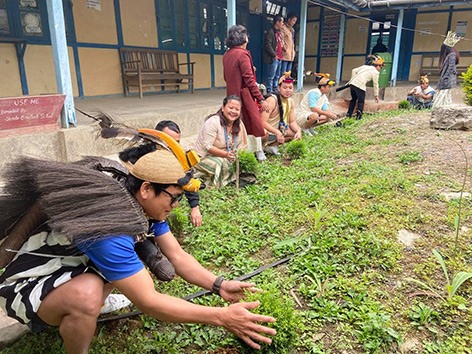 KIMIN, 26 Feb: Along with the rest of the state, the Nyokum Yullo was celebrated here in Papum Pare district on Friday, led by celebration committee chairman Tame Tara.

Describing Nyishis as a major tribe of Arunachal, Gao advised them to “lead the state by maintaining unity and peace among all communities of the state.” He also called for preserving the mother tongues, traditions and customs of the state’s tribes.

DIPRO reports: Nyokum Yullo was celebrated in Longding district headquarters with a difference.

The celebration started off with a tree plantation drive in the district hospital premises, and distribution of fruits among the patients in the hospital by the Nyishi community living in the district.

Celebration committee chairman Langkung Radhe spoke about the importance of preserving the indigenous traditions and cultures, while CO Gyamar Amte briefed the gathering on the origin and importance of Nyokum celebration.

DC Bani Lego, who also attended the celebration, said that “in order to protect our identity, we have to protect our tradition and culture.” He commended the Nyishi community in Longding for preserving, promoting and showcasing their rich culture.

A cultural event and a feast were the highlights of the programme.