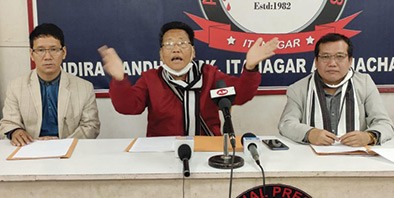 ITANAGAR, 27 Feb: In a step to curb the money culture in its community students’ union politics, the Nyishi Elite Society (NES) on Saturday announced that aspiring candidates using money to get elected to the executive posts of the All Nyishi Students’ Union (ANSU) would be “socially boycotted.”

The NES made the announcement during a press conference at the Arunachal Press Club here, wherein it also announced several other resolutions towards bringing electoral reforms in the ANSU election.

Stating that the financial expenses during ANSU elections run higher than that in MLA and MP elections, NES president Bengia Tolum said, “The NES won’t leave the matter with only advisory this time as somebody has to bell the cat.”

Tolum also informed that, besides the candidates, those who sponsor such candidates would also be boycotted socially. “They will not be invited to any social event, nor will anyone attend social events hosted by such individuals,” he said.

The NES president informed that the resolution in this regard has been taken following the Dr Begi Committee Report on ANSU Electoral Reformation, which has been accepted by the NES. He said the same was officially communicated to the ANSU on 15 January by the NES.

Regarding implementation of the resolution in letter and spirit, Tolum informed that the NES already has block and district level committees to put a check on such activities, and based on their reports “strict actions will be taken.”

Commenting on the practice of unions collecting donations illegally from the business community and government departments, the NES president said that involvement of huge money during elections is the root cause of such practices. He expressed hope that “if expenditures by candidates can be checked, then donation collection activities will also stop.”

Meanwhile, Tolum announced several other reforms, which include upper age limit of 33 years for ANSU executives; past credentials and experiences of candidates, especially for the post of president and general secretary, in reputed student organizations; candidates not having any political affiliation, etc.

Acknowledging that many aspiring candidates take admission in educational institutions solely to contest elections, Tolum informed that, from this time onwards, every ANSU candidate shall have to be a regular student pursuing a course continuously without any break in any academic year.