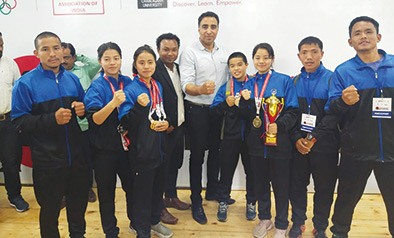 ITANAGAR, 2 Mar: The Wushu players from Arunachal performed outstandingly to bag seven medals and finish second runner-up in the Taulu event in the 29th Senior National Wushu Championship in Punjab.

They bagged four gold and three silver medals in the championship, which was held in Chandigarh University, Mohali, from 25 February to 2 March, informed Arunachal Pradesh Wushu Association president Toko Teki.

Nyeman Wangsu bagged three medals – one gold each in the Gunshu and Daoshu events and a silver in the Chanquan event.

Mepung Lamgu bagged a silver medal each in Taijiquan and Taijijian events.

Impressed by the performance of Wangsu, who has been performing consistently for the last couple of years, the national Wushu officials have advised the Arunachal Wushu Association to get her ready and prepared for the upcoming Asian Championship, Teki said.

Teki congratulated all the medal winning players for their outstanding performance at the top national level event.

Arunachal Olympic Association secretary-general Abraham K Techi said that all the medal winning players have qualified for the National Games to be held in Goa later this year.

Techi also congratulated the players for bringing laurels to the state by winning medals in the prestigious event.