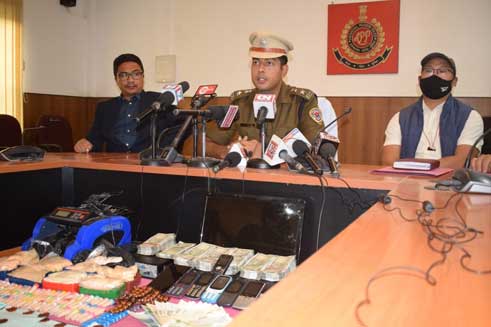 The duo has been identified as Jiten Biswas (33), of Parwatipur village in North Lakhimpur, Assam, and his associate Uttam Nath (27), of Jajapur Anizara Para, Assam.

Some of the other items recovered from the arrested persons include Rs 6.4 lakhs in cash, 569 Yuan (Chinese currency), a currency counting machine, a laptop, four mobile phones, a DVR which was connected to the three CCTVs in the house they were staying, and a Hyundai I20 car bearing registration number AS07-M-8922.

The arrests were made following an intelligence input about Biswas’ movement with contrabands. Biswas, who is said to be a kingpin of the interstate heroin business, was wanted in several cases registered against him in both Arunachal and Assam. The duo was arrested from Kimin circle near here on Wednesday and will be under police custody for six days.

Speaking to reporters, SIT (Crime) SP Rohit Rajbir Singh said that they are hoping that with the arrest of the kingpin, the interstate drug trade can now be controlled.

“This is one of the biggest achievements to be ever made by the state police as a lot of hard work was put in by the SIT team,” Singh said.

Further investigation in connection with the case is underway, and an FIR under Section 22 (c)/27 (a)/27-A of the NDPS Act has been registered at the crime branch police station here, he informed.

“During the investigation, we will try to bring out the main source of the banned substances and the middlemen involved. So, many more arrests to be made in the case,” the SP said.

The operation was formulated by the SIT SP, who was assisted by SIT OC Inspector Ngilyang Lali and multiple other teams.