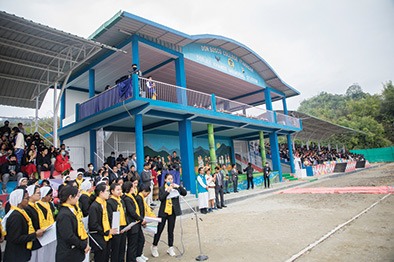 JULLANG, 6 Mar: The Dorjee Khandu memorial stadium in Don Bosco College near here has been completed despite a fund-cut of Rs 1 crore from the total Rs 3 crore.

Inaugurating the sports stadium named in memory of his late father and former chief minister Dorjee Khandu, Chief Minister Pema Khandu on Saturday dedicated the stadium to the people.

Lauding the Don Bosco authorities for closely monitoring to ensure successful completion of the stadium, Khandu said it was an example to be followed across the state.

Incidentally, Khandu in his last visit to the college in 2017 had felt the need for a stadium in the college premises for overall growth of the students, and hence had announced a sanction of Rs 3 crore for constructing one.

“I regret that due to unforeseeable circumstances the full sanctioned amount could not be released. Despite the fact, the engineering wing of the education department, under the close supervision of college authorities, completed the project on time,” he informed.

Khandu made a call to all agencies to emulate the example of not only completing a project despite fund-cut but completing it on time without compromising with the quality.

Of the Rs 3 crore sanctioned, only Rs 2 crore was released for the project. Khandu assured that the remaining sanctioned amount would be released this financial year.

The chief minister welcomed the gesture of the college authorities to allow the use of the stadium by the state government and other organizations for conducting various state and national level events.

“This is a welcome gesture. This stadium will now not only be an asset of the college but of the entire state,” he said.

He advised Education Minister Taba Tedir, who was also present, to “study the feasibility of further expansion of the stadium, so that it can host state, regional and national level events in the future.”

“Given a detailed project report, I assure that funds will be placed for further expansion of the stadium,” Khandu declared.

Informing about the just passed 2021-22 state budget, Khandu said this year has been declared as the ‘Year of education’. He said the government’s top priority this year would be overhauling the education sector.

“We have kept budget provisions of about Rs 1,000 crore for education. We will develop and create infrastructure wherever needed, especially in rural and interior places,” he said.

Khandu said that the welfare of teachers would be paid attention to, and teachers’ quarters would be constructed for government schools, wherever required.

“We are also concentrating on providing in-service training to all government teachers. For this, we have allocated Rs 15 crore for training and exposure trips to teachers,” he informed.

Addressing the students, Khandu urged them to learn and adopt their indigenous culture. He reiterated his appeal to learn and speak one’s mother language as much as possible.

Expressing gratitude to the college for producing many doctors, engineers, civil servants, scholars, entrepreneurs, etc, who are giving back to the society, Khandu appealed to the students to come back to the state after completing their professional and university courses and serve the people of the state.

Meanwhile, the chief minister acknowledged the contribution of organizations like Don Bosco, RK Mission, Vivekananda Kendra and others in the field of education. He assured that the state government would continue to provide grants-in-aid to all these organizations. (CM’s PR Cell)