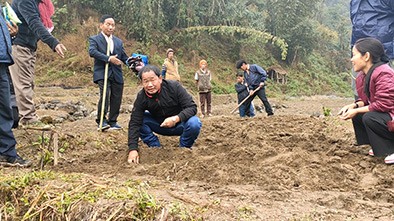 KHONSA, 6 Mar: Tirap DRDA Project Director Hakresha Kri, accompanied by the Tirap ZPC, the Lazu EAC (in-charge) and the DAO inspected the cluster farm in Tutnu village, around 46 kms from the district headquarters here, on Friday.

Interacting with the beneficiaries, Kri suggested to the farmers to form a farmers’ executive committee group for cluster farming, which is required to be registered as an NGO to avail the facilities under the Aatmanirbhar Bharat schemes.

He said “cluster farming on community basis helps easy marketing, as individual farmers may not be able to market their agricultural produces.”

The PD urged all the beneficiaries of Tutnu to properly implement cluster farming, and to ensure that the MGNREGA works are completed within March.

Kri said all logistic support would be provided to the interested farmers of Tutnu and Sinnu villages in Lazu circle for cluster farming in the days to come.

He said that jhum cultivation is a traditional/primitive agricultural system which is predominant in Tirap district since time immemorial. “Due to lack of plain land and financial constraints, people are compelled to continue with the system,” he said.

Khoisia informed that the state government has sanctioned some amount for scientific land terracing to discourage the existing jhum cultivation. But he said the fund provided “is too meagre to cover all the villages.”

ZPC Chathong Lowang said the schemes launched by the central and state governments under Aatmanirbhar Bharat would go a long way in helping the poor farming community to improve their livelihood and economy.

Lazu EAC (in-charge) DK Thungdok informed that similar cluster farming is being taken up in Sinnu village in Lazu circle. He also assured to render all possible help to the farming community with the help of the line departments.

Earlier, the first sowing of crops in the farm was done by Kri along with his team. The seeds were provided by the DAO. The crops will be ready for harvesting in June/July.

The chief of Tutnu, the GB, the GPCs, APO (RE) Telem Kitnya, representative from the IPR department Gawang Sumpa, and panchayat leaders of Tutnu and Kolam villages were present.

Earlier, Kri, accompanied by the Lazu EAC (in-charge) the DAO and the APO (RE) inspected the construction of houses under the CMAY (G) in Upper Kolam village, where construction of 50 houses was found to be satisfactory.

Kri advised the beneficiaries under the PMAY (G) to develop kitchen gardens in their surroundings. (DIPRO)