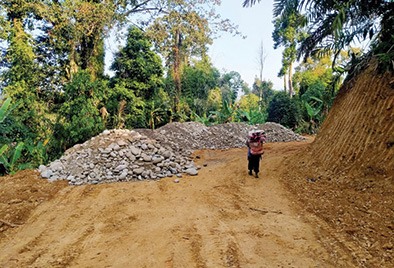 The Miao-Vijaynagar (MV) road is the lifeline road that connects geographically isolated Vijaynagar circle to the rest of the state. The circle shares boundary with Myanmar on all three sides.

As per the information uploaded by the government of Arunachal, the construction of the Miao-Vijaynagar road began in 1966. This makes the MV road some 55 years old! Somehow, the NEFA government sensed the importance of connecting the remote Vijaynagar administrative circle with the rest of the territory.

The then CPWD was called upon to take on this road. Armed with wheelbarrows, rods, pickaxes, spades, dynamites and so on, the committed workers toiled and completed the road in 1974.

The then chief commissioner KAA Raja inaugurated the MV road at Miao in 1974. The next year, 1975, after becoming the lieutenant governor of the territory, Raja visited Gandhigram and Vijaynagar in a fleet of jeeps. It was a sight to behold! Most of the villagers saw vehicles for the first time. Children ran behind the jeeps. The smell of the vehicle’s smoke was so unique and unforgettable.

It is also told that EE DK Malahotra, after the completion of the road, was awarded gold medal.

Those years, some villagers also bought used jeeps. Over the next couple of years, the jeeps, along with the road had a slow and painful death. This was due to the non-maintenance of the road. Only one jeep, owned by Lemesey Yobin, was lucky to have been evacuated from Vijaynagar by a chopper.

Since the late 1970s, the road remained abandoned by and large. A visit to Vijaynagar takes some six days’ walk (on average). Walking for days, with a load slung over one’s shoulders or head is trying, to say the least.

Of course, there is a helicopter service in place for Vijaynagar, but it is cannot meet the needs of the common citizens.

In December 2009, Changlang DC SB Deepak Kumar walked the 157 km Miao-Vijaynagar road. After this painful experience, he strongly recommended its early restoration. This generated much awareness about the plight of the people who dwell in the international border areas of Vijaynagar. Some journalists called the citizens of the circle “Prisoners of geography.”

During 2010-12, former governor JJ Singh also stressed the importance of resurrecting the MV road. Like his predecessor KAA Raja, he too expressed hope that he would be able to reach Vijaynagar on a jeep.

Recently, Governor BD Mishra has taken cognizance of the fact that this incomplete mere 157 kms road, which the CPWD laid manually between 1966 and 1974, is a matter of disgrace. Therefore, the governor has been taking on this road project on a war footing. And the citizens are beginning to see the results of his tireless efforts. His commitment is unquestionable.

As of now, parts of the road have become useful. The road-laying is still not completed. The bridges are still not done, including the prominent ones like the 6th Mile Empen river, Burma Nallah, etc. These rivers are shallow as of now; however, they will soon swell as the rains start.

Again, as of this week, taking advantage of the dry season and the laid portions of the road, one can drive a truck a little beyond Aguhomu or 52nd Mile. But one has to remember that many of the bridges are not completed as yet.

The Miao-Vijaynagar road is enigmatic. After some 55 years – more than half a century – no APST bus has made its appearance on the other end. What do you make of it? What does it tell?

The past is in the past. Now the citizens of this remote easternmost circle have put their hope in the effective leadership of Governor BD Mishra and are immensely grateful for his efforts. Also, the people are thankful to our Chief Minister Pema Khandu and his team, anticipating that the people of Vijaynagar circle will no longer carry CGI roofing sheets on their heads for a week but will have sufficient salt for their daily needs.