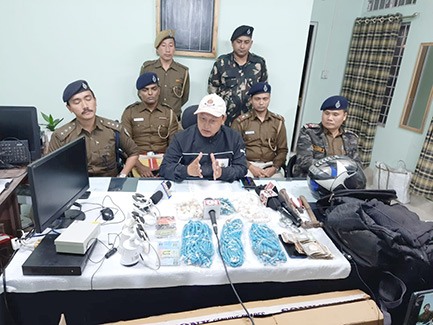 NAHARLAGUN, 7 Mar: The police here arrested one Tok Changriang and recovered local ornaments and jewellery worth approximately Rs 1.1 crore from his possession.

Addressing reporters at the police station here on Sunday evening, Itanagar Capital Region SP Jimmy Chiram informed that the recovery was made on Friday from Changriang’s house in NEEPCO Colony in Doimukh after he had been arrested earlier on the same day from the Naharlagun market area.

Estimating the recovered ornaments to be worth Rs 1.1 crore out of the total Rs 1.4 crore worth of stolen items, the SP assured that the remaining jewellery worth Rs 30 lakhs would also be recovered soon.

Referring to the case as a blind one, the SP said that a dent in the front of a blue Honda Activa scooter seen in one of the CCTV footages from the crime scene became the basis of the investigation.

“Our police team, headed by Naharlagun SDPO Rike Kamsi, OC K Yangfo, SIs AK Pandey and SS Jha, HC Iter Ngomdir, Constables Pradeep Das and Millo Khokum and Itanagar SDPO K Sikom searched all blue Honda Activa scooters in the capital region and zeroed down to one that belonged to Changriang, whose scooter had the dent seen in the CCTV footage from the crime scene,” Chiram said.

After Changriang was arrested from the Naharlagun market area, his house was searched and all the recoveries were made.

Saying that the accused is a habitual offender, the SP informed that a hammer, pliers and a jack, which were used to break into houses, were recovered from his house. He further informed that the house of the accused was under surveillance with CCTV cameras on four sides.

“He had been conducting surveillance of his own,” the SP said.