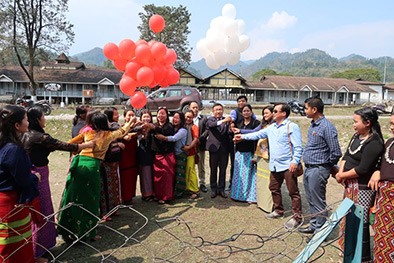 The programme was organized by the NMOSC in collaboration with the women & child development department and the Enjalumenda Women’s Empowerment Forum (EMWEF).

LDV DC KN Damo said, “We have spoken enough about empowering women, women’s rights and honour. It is now time to walk our talk and give all of these to our women in actuality. A family that has a strong mother will always perform better compared to a family in which the mother doesn’t show enough strength. It is important that a woman empowers herself and makes herself strong to ensure a proper functioning family,” he said.

He also said that support and cooperation from womenfolk ensure success in all fields, especially in current issues like curbing the drug menace, developing the organic farming sector and maintaining a clean and green, plastic-free LDV.

“Awareness is the greatest agent of change,” she said.

NMOSC chairman Desai Linggi spoke about the child care institute (CCI) and the special adoption agency (SAA), both of which are also run by the Nani Maria Society (NMS). She appealed to the people not to indulge in any kind of illegal adoption, not even out of emotions.

“You can always register yourself as potential adopters. We at the SAA will always guide you in adopting legally. Please refrain from illegal adoption at any cost,” she appealed. She also advised the womenfolk to be fully aware of their rights but not to take wrong advantage of those rights.

NMOSC CA Ashanu Linggi spoke about the OSC, which is provides integrated support and assistance to women, including girls under the age of 18, affected by violence, both in private and public spaces, under one roof.

“The OSC will facilitate immediate emergency and non-emergency access to a range of services including medical, legal, psychological and counselling support under one roof, all free of cost,” she informed, adding that the OSC has handled around 115 cases till date.

Dambuk ZPM Toni Borang commended the organizers for organizing the event in Dambuk. He spoke about polygamy and about equal property rights for the girl child.

“Women are the backbone of the society. Let us pledge to give equal property rights to our daughters,” he said.

Dambuk PS OC Oimang Pertin, who is the first female OC in LDV, said, “Women are already empowered. What is needed is to support each other. Women are oppressed by women since ages. Instead of teaching young girls to stop playing or behaving like boys, mothers should start treating their sons and daughters equally. Give equal importance and opportunity to both the genders to make a difference. We may be weaker physically, but there is no other field where females have not proved to be equal or better than their male counterparts.”

Sanitary pads were distributed during the event. Many SHGs and schoolchildren also presented songs and dances.

I am Property, a short film by filmmaker Karry Padu, which navigates between impunity and polygyny in the context of customary laws in Arunachal, was also screened during the event.

Celebrating the IWD at the Doimukh Government College, its Principal Dr Taw Aju appealed to all to respect the role of the women in the society. Aju also advised the male students to shun the idea of being privileged members of the family.

The importance of a girl child in a family was also highlighted by many speakers on the occasion.

IWD was also celebrated in Khela in Tirap district by the Nocte Women Welfare Association (NWWA). Fifty-nine villages of the Nocte community attended the event.

Attending the celebration, Tirap DC Taro Mize stressed the need for empowering the women. Responding to a memorandum submitted by the NWWA chairperson Chasuam Wangchadong, the DC assured to help construct a protection wall around the NWWA office in consultation with the engineering department.

NWWA chairperson Wangchadong said the concept behind celebrating the day by the NWWA was to create awareness among the Nocte women living in different parts of the district about the importance women empowerment.

Khela-Bunting ZPM Tumwang Lowang appealed to the women of the community to take proper care of their children and keep strict vigil on what their children are doing. Lowang said drug, including opium, addiction among the youth is increasing day by day in the district.

DMO Dr N Lowang encouraged the people to get vaccinated against Covid-19, saying that vaccination is being carried out in full-swing in the district.

IWD was also celebrated by the Women Welfare Association at Nehru Stadium, Khonsa.

The Miao unit of the APWWS donated blankets and eatables at the old age home in TR Camp. The unit also felicitated Class 10 and 12 toppers of the government higher secondary school in Namphai. The day also saw felicitation of Covid warriors of the Miao CHC. (With inputs from correspondents and DIPROs)