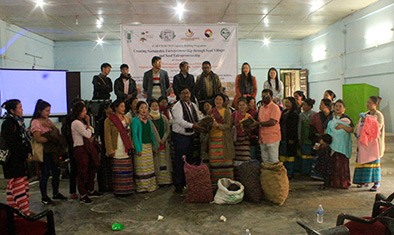 As many as 113 farmers and other stakeholders participated in the programme.

While KVK Head Dr Santosh Kumar informed the gathering about the importance of organizing the training, DIET lecturer Lipu Eshi highlighted “the change in the social, economic, cultural and political achievements of women in today’s era” and encouraged womenfolk to become self-independent.

CTCRI Principal Dr P Sethuraman Sivakumar explained the need to alleviate micronutrient deficiencies in the Northeast region and stressed the need for integrating bio-fortified foods with the traditional food system. He advocated the ‘rainbow diet’ approach, focusing on tubers, for promoting health and wellness.

He informed that the rainbow diet strategy focusing on children involves popularizing various foods like noodles, pasta, cakes and cookies prepared from bio-fortified varieties. CTCRI principal scientist Dr K Laxminarayana informed that about seven tonnes of planting materials of bio-fortified and other tuber crops varieties are being distributed to the farmers, and explained the scientific methods of producing quality planting materials of tuber crops.

Presentations were made by the KVK scientists on the traditional cultivation practices of tubers in Anjaw district.